The Yamaha CLP775 digital piano is a new model for 2020 which features a Grand Touch ‘Improved’ keyboard, re-sampled Yamaha CFX & Bosendorfer concert pianos, as well as some superb fortepiano voices including Broadwood, Kristoefl, Walter and Pleyel. An enhanced cabinet design and amplification system makes this instrument a significant set up from the lower range CLP700 series models.

GrandTouch Improved Keyboard
Yamaha ‘GrandTouch’ keyboard first appeared on the older generation CLP675 and CLP685 models. The manufacturer has listened to feedback from consumers and musicians and made some modifications to further improve the piano-like experience of this wonderful keyboard.

GrandTouch keys have longer length and give the player more leverage and allow for greater expressive control. In fact, the support length of keys is the same as on Yamaha’s S3x premium hand-crafted grand piano.

Premium Quality Piano Voices
The CLP775 is loaded with the very best sampled piano voices Yamaha has ever produced. The first two piano voices are the mighty CFX and Bosendorfer concert grands. The CFX is powerful across all registers, whilst the bosendorfer gives a more delicate sound and is particularly suited to romantic classics. Both the CFX and Bosendorfer voices have been recorded using binaural sampling technology which results in a surround sound experience when using headphones with the instrument.

The CLP775 is also equipped with a large range of ‘other’ instrument and orchestral voices including strings, harpsichord, clavs, e.pianos, choir and even classical & jazz organs.

The new CLP700 series has some additional fortepiano voices for recreating the authentic performances of composers such as Beethoven, Chopin, Scarlatti and Mozart.

Virtual Resonance Modelling
The sound of a grand piano resonates throughout the body of the instrument, providing a rich reverberation that surrounds the listener in sound. This natural reverberation is replicated perfectly in the CLP775 Clavinova through Virtual Resonance Modeling (VRM), which calculates the various states of the strings for each of the 88 notes on the keyboard from one instant to next. This allows for the vivid, richly-varied expression that reflects the limitless number of factors inherent in playing the piano.

Touch Sensitive Control Panel
On the CLP775, physical buttons have been replaced by a touch sensitive control panel located below the LCD display screen. The button lamps switch off after use leaving just a single on/off switch visible on the instrument itself. This further enhances the appearance of the CLP775.

Bluetooth Connectivity
The Yamaha CLP775 has both Bluetooth MIDI and audio compatibility. This means you can connect the instrument to your smart device such as a smartphone or tablet for use with the many music-making apps which are available. Yamaha’s Smartpianist app transfers control of all the piano’s features to the touchscreen of your external device, or perhaps you could use this feature to do some multi-track recording using Apple’s Garageband or Steinberg’s Cubasis. The possibilities are endless!

Record and Share Your Performances!
The USB audio player / recorder gives you the ability to record your performance to uncompressed .WAV format. This makes it simple to share your music with friends & family, or even upload it to an internet music sharing platform. Audio recordings are stored on a USB memory stick (not included).

Speak to us today

Due to COVID-19 we will be operating from an appointment only service until further notice. Please call our store on 0141 564 1170 to arrange a 1 hour appointment slot.

We apologise for any inconvenience caused.

Any cookies that may not be particularly necessary for the website to function and is used specifically to collect user personal data via analytics, ads, other embedded contents are termed as non-necessary cookies. It is mandatory to procure user consent prior to running these cookies on your website. 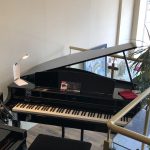